Whiz wit?  Prov witout?  Whether you’re from Philly or just visiting, everyone has an opinion on cheesesteaks.  Does it have to be an Amoroso roll?  Is cheese wiz better than provolone?  We’ve compiled a list of what we think are the Best Cheesesteak Sandwiches in Philadelphia – some classics, some new on the scene, but all delicious!  The list is not ranked in order – follow us @americaneats to let us know what you think is number 1! 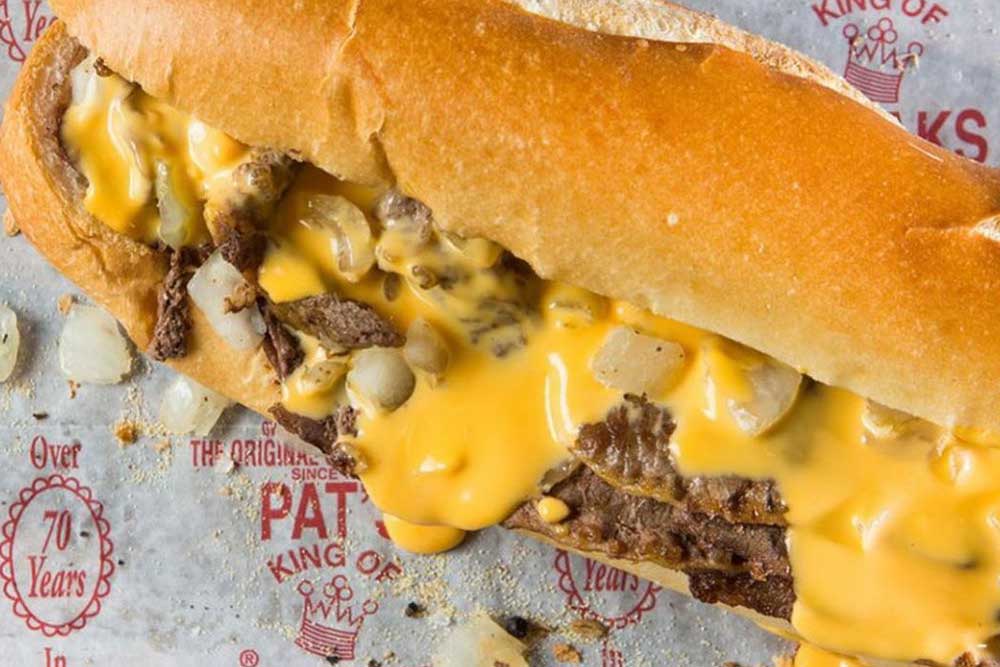 According to Philadelphia’s tourism site, the cheesesteak was invented in the 1930’s, “when Pat Olivieri, a hot dog vendor…threw beef on his grill to make a sandwich.  A passing cab driver asked for one, too, and soon Oliveri had a following.”  Thus, Pat’s King of Steaks was born!  It’s open 24/7, and they’ve been serving cheesesteaks for close to a century – you know it’s good if it keeps people coming for that long. If you’re visiting Pat’s, you have to save room for another cheesesteak right up the block at Geno’s.  Joey Vento started it in 1966 and some think he was the first to put cheese in cheesesteaks.  Either way, they’re also open 24/7 and have been serving cheesesteaks in Philadelphia for over 50 years – so they have to be doing something right.  Head to both Pat’s and Geno’s and judge the competition for yourself! Tony Luke’s never set out to make a cheesesteak sandwich.  Instead, they wanted to serve the large Italian-American community in Philly with roast pork and chicken cutlet sandwiches.  But the demand for their version of a cheesesteak only intensified over the years and in the 90’s, they added one to the menu.  They also do delicious chicken cheesesteak and use local ingredients from the mid-Atlantic area. Folks have been coming to the Bucci family for roast pork sandwiches since 1930.  Like Tony Luke’s, John’s Roast Pork eventually got into the cheesesteak game and are well known for having one of Philadelphia’s best!   Owner John Bucci swears there won’t ever be a second location, so you’ll have to head to South Philly to try it! If you text five friends, “What’s the best cheesesteak sandwich in Philadelphia?”, three will text back “Dalessandro’s” (at least that’s what happened when I asked my friends).  The restaurant has been slinging cheesesteaks since the 60’s and were recently bought in 2009 but kept open.  In 2016, Jimmy Fallon, a Dalessandros superfan, fed 76’ers #1 pick Ben Simmons a cheesesteak on The Tonight Show.  If it’s good enough for Jimmy… In Philadelphia, they pronounce “water” as “woodier”.  So how do you pronounce Woodrow’s?  Probably something like, “mmmmmm”.  Opened in 2015, it’s very quickly become one of Philadelphia’s favorite cheesesteak spots.  They also serve mouthwatering Philly favorite sandwiches if you’re looking to get a second sandwich with your cheesesteak. The history of Shank’s goes way back to South Philly’s Italian Market, where Shank and Evelyn Perri opened a luncheonette counter in the 60’s.  After years of success they sold Shank’s to an entrepreneur named Phil McFillin (yes, really) who has taken the Shank’s formula into the 21st century.  Now they use that Italian Market tradition, using fresh ingredients to make some of Philly’s most delicious cheesesteaks. Well, they at the very least have the best name for any cheesesteak place in Philly.  Gooey Looie’s lives up to their name though!  They serve ENORMOUS, gooey, cheese-dripping sandwiches.  Maybe bring wipes – the mess will be worth it. Remember simpler times, when great home cooks would just sell incredible food from their homes, and turn that into a thriving business?  Now they’d be sharing recipes on YouTube or TikTok, probably.  Jim’s Steaks started in 1930, when a West Philadelphia couple named Jim and Millie sold sandwiches from their house and converted it into a restaurant.  It’s exchanged owners since then, but they continue churning out some of the best cheesesteak sandwiches in Philadelphia daily. Kobe Bryant was one of the first players in the NBA to make the jump straight from high school to the NBA. But every GOAT needs nourishment, and Kobe found his at Larry’s Steaks on 54th Street. With their big “Belly Filler” cheesesteaks, delicious pizzas and vegetarian Strombolis, there was always something on the menu to feed the big man’s appetite back then…and yours now. For something different, try the chicken cheesesteak or veal grinder with cheese and sauce or the Mega Fries with bacon, mozzarella, cheese whiz and provolone. Plus you can also order quesadillas, Buffalo wings, wraps and more. Larry’s is loaded with the stuff that satisfies your appetite. They also have a second location on Girard Ave and 10th. ✅ Big screens  ✅ Cold beers ✅ and great wings. These are all essentials in a great sports bar, and Philadelphia is teeming with comfy spots where you can catch the game, enjoy a few drinks with friends and grab some delicious food. We have created a list of some of the top sports bars in Philadelphia to check out when you want the drinks cold, the food hot, and your favorite team on the big screen. Whether it’s for a birthday celebration or to have a good meal with friends and family just because, going out to eat with a group of people you love is always a great time. Depending on the size of your party, it can be tough sometimes to find a place that will accommodate what you need. We’ve put together a list of places we love and we think you’ll love bringing your whole crew to. Here is a list of restaurants in Philadelphia that are great for dining with a group. Pizza in Philadelphia proves that some cliches are true – even bad pizza is still really good. But this isn’t a list about bad pizzas. We’re talking about Philly’s BEST pizzas – pizzas so doughy, saucy, and cheesy that you’ll remember every bite. Plus we’re covering every style of pizza – from New York style to Roman Pizzas to Detroit style pies – all in the list below! The sky’s the limit at these Philadelphia rooftop restaurants and bars offering both stunning views and fabulous food. Here are some great places around town to social distance from the ground!